My own kind of girl 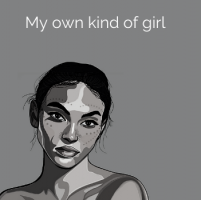 girlMy early childhood was spent in a gated American compound on the shores of the Arabian Gulf. I lived in hand me down shorts and t-shirts and barely ever wore shoes. My blonde mop was cut short and kindly ladies in the commissary, would exclaim to my mother what a beautiful little boy she had. I don’t remember caring too much for dresses but I vividly recall the excitement of inheriting my brothers’ ‘baseball’ pyjamas.

In time I grew into my feminine side and by my early teens had discovered the joy of changing my look with makeup and clothes.  I formed close new friendships with a group of strong willed, gutsy and spirited girls who are still cherished friends today. But I never lost a sense that it was better to be more boy. To my mind, boys were strong and fearless and put fun to the top of their agenda.  Boys went to Sea Scouts, where they built dens in the loft of the Scout hut and learned to tie knots and sail dinghys. I went to Brownies where I could earn my Homemakers badge by making cups of tea and baking biscuits.

Socially, I was the underdog to girls who were better at navigating unwritten rules of social conduct, that we were required to know in order to be popular. Boys were less complicated or maybe less sophisticated. I understood their rules of engagement and embraced a tom boy persona, telling people who would comment on my ‘I can do anything’ attitude, that it came from having two big brothers. It didn’t occur to me that I was just being me, my own kind of girl.

Female leader is not an oxymoron

This self assuredness mostly worked well for me.  I could upset female friends who sometimes found my assertiveness abrasive or insensitive, but what I had learned early on was that qualities that I cultivated and associated with boys or men, were praised and encouraged. Margaret Thatcher was Prime Minister in my early formative years and whatever you think of her politics she was an iconic female. I assimilated the idea that a strong woman should suppress her softer, empathetic and caring qualities and adopt more male behaviours and in doing so, she too could be a leader.

I have been wondering if becoming a mother brought me into myself more fully, creating tension between my instinct to nurture, love and soften in motherhood and my belief growing up, in how I should be in the world.  Whatever it was, that period of my life when I was trying to resurrect my career and be a mother to my two little boys was difficult and confusing; I was less having it all and more failing at everything.  My husband is a hands on dad but even so, I was endlessly guilty about running out of work early, only to be late to collect from the childminder. I started to question who I really was and what I wanted from life.

There has been a definite shift in what we see as desirable qualities for a leader. The world’s female leaders have been praised for the way they have handled the coronavirus pandemic. Empathy, compassion and adopting a more collaborative, risk averse approach are seeing better short term outcomes for their countries than those led by men.

Mary Portas, the retail industry expert and founder of the Portas communications agency, published her book and manifesto Work Like A Woman which argues that  ‘fairness, kindness, collaboration and values that historically have not been recognised within businesses’ will be the future. Portas built her career on the belief that to be successful she had to operate like a man. Now she’s a champion of eliminating alpha culture in the workplace and embracing qualities that have historically been seen as “female” but are actually just “human”.

Mary Portas’ message is powerful for boys and girls alike. I’m certain there are as many men as women who find the ‘alpha culture’ of business off putting. I wonder why, when we talk about boys and girls, do we emphasise the differences and not all the ways in which we are the same? We should teach our children that empathy, compassion and collaboration make us stronger, not weaker. That successful leaders are not typically more masculine or more feminine, successful leaders are simply human.

As for me, I’m rediscovering that sense of self assuredness that I had growing up. This time I’m trying to embrace my weaknesses as well as the good bits, because that is who I am. I now know that integrity starts with accepting your individuality, not constantly holding yourself up for comparison to others.