Being exclusive isn’t the goal. I often think about expanding our programme to men, after all, I ultimately feel that everyone can benefit from a holistic approach to their working life. But we are not there yet. We are not able to have safe spaces where people can share common ground, similar challenges and that room is a mix of men and women.
I have spent a lifetime examining my relationship with the male gender. From an absent father, sexual assault pre puberty, male bullies at school, cheating boyfriends, two stalkers… just to take you up to age 22. I have had my fair share of bad experiences with the male gender. And before you say it, I don’t hate men. I hate the power that has come from some gendered systems which promote violence of any kind. And violence comes in many forms, including taking control of women’s rights.  Furthermore, if you are a man and feel like you are ‘tarred with the same brush’, instead of getting defensive, speak up on behalf of women’s rights instead.

Feeling angry and rightly so 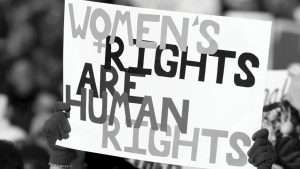 From SCOTUS to Afghanistan, women are being controlled purely based on their gender.  Human Rights Watch said,  “The violence of the Taliban is seen in many ways,” a government worker said. “It is a form of violence when they don’t let women to work. It is violence when they don’t let young people get education.  They have taken every hope from people – that is violence… They rule by fear. It’s painful to watch the society living in fear.”

In Afghanistan, the Taliban have imposed rights-violating policies that have created huge barriers to women’s and girls’ health and education, curtailed freedom of movement, expression, and association, and deprived many of earned income.  The Taliban have banned women and girls from secondary and higher education, and altered curricula to focus more on religious studies. They dictate what women must wear, how they should travel, workplace segregation by sex, and even what kind of cell phones women should have. They enforce these rules through intimidation and inspections.  And before you think that doesn’t happen in the Western world, let’s talk about the recent decision to overturn Roe v Wade.

Reported by the Economist, a Supreme Court refashioned by Donald Trump’s appointees finalised a sweeping opinion that had been leaked months earlier. It declared that the constitution contained no fundamental right to abortion, that the landmark Roe v Wade decision from 1973 had been “egregiously wrong from the start”, and that states could start to regulate abortions as they saw fit.  Some 13 states had “trigger laws” designed to ban abortion soon after this moment came; some went into immediate effect.  In the most doctrinaire pro-life states, the abortion regime will be more austere than that of Pakistan or Saudi Arabia, which permit the procedure to preserve the health, not just the life, of the mother. Democratic-dominated states have codified Roe’s right to abortion up to the point of fetal viability, a more permissive standard that that of Norway and Sweden, which have gestational limits for terminating pregnancies at 12 and 18 weeks, respectively.

What about the UK

But that is in America, right?  Not so sure.  Check out the work of Back Off Scotland regarding abortion.  Their linktree page is worth a look as they have helpful ways to take action, including easy ways to write to your MSPs.  According to a survey from King’s College London, equality between women and men ‘doesn’t really exist’, say one in seven Britons.  One in seven (15%) Britons think gender inequality doesn’t really exist, with men (19%) more likely than women (11%) to hold this view, according to a major survey conducted ahead of International Women’s Day on 8 March.

How does the UK compare to other countries for violence against women?  Violence against women is more common than you might think. And it’s often not a one-time event. It has both mental and physical effects, many long reaching. It impacts a woman’s ability to work or have trusting relationships. It is perpetrated by strangers, but more likely someone well known to the victim.  The UK compares quick poorly against other countries when it comes to the prevalence of violence against women. According to data from the OECD, the percentage of women who have experienced physical and/or sexual violence from an intimate partner at some time in their life in the UK is 29%. Compare this to around 20% in Italy, Greece and Russia. Or 13% in Spain. Or 1.9% in Canada. Women in the US fare worse, with a whopping 35.6% of woman experiencing physical or sexual violence from a partner at least once.

According to Forbes, in spite of the unfairness and economic cost of gender inequality, it appears that some men perceive women’s recent push toward gender equality as a threat, and are trying to use their power to decelerate, and in some cases reverse our progress. This includes, for example, male managers becoming hesitant to mentor women in the workplace as a side effect of the #MeToo movement, and male-dominated political bodies trying to increase control over women.  Unfortunately, COVID-19 has intensified violence against women.  Socio-economic stressors such as employment and external stressors such as food insecurity and family relations have a significant impact, not only on experiences of violence or feelings of safety but also on women’s well-being overall.

So for now, we need safe spaces for women to be able to share, heal, grow and help level the playing fields in small and big ways. This is not an act of exclusion to men, it is necessary until the current systems change. If you are a man and want to be included, we invite you in to help us end some of the common acts of inequality and violence towards women. We welcome all allies with open arms.

“Feminism isn’t about making women stronger, women are already strong, it’s about changing the way the world perceives that strength.”

We would love to know your thoughts, please feel free to get in touch at dani@realkeystone.org or through our social channels. If you think someone you know might appreciate this blog, please share.